For a Baby Goat. And for Kate, Who's love of Baby Goats knows no bounds.

When evil kept me awake in my bed
And suffering howled through my veins, like a foul wind.
I rose to find you, baby goat.
Just now discharged upon the earth, a mucusy jewel of life,
all skin n’ bones n’ floundering brightly.
Held in peace, the hum of a farm's biorhythm.

You are the gravity that bends light around distant stars.
The old brass key that fits no door. The stumbling block.
Hungry bleats of vulnerability,
legs like twigs that tremble with life.
The problem in this world is not evil, but goodness!
Your infantile innocence defiantly contradicts.
Contradicts the genocides, homicides, terrorism, racism, greed and pollution,
that cast the Earth's dark shadow.
These evils makes sense, a thread connects them
and weaves through every broken human heart.
But you do not make sense little goat, filled with light.
You have come from nowhere and suddenly you are there
Shivering and sublime among the thorns and wild flowers,
Unashamedly existing.
Adorable eyes daring me not to hate, daring me not to fall into despair.

You are licked clean, baptized in a mothers love.
And off you wander, to sniff a flower, trip on a pebble
And be a light to the world.
Baby goat, just born. 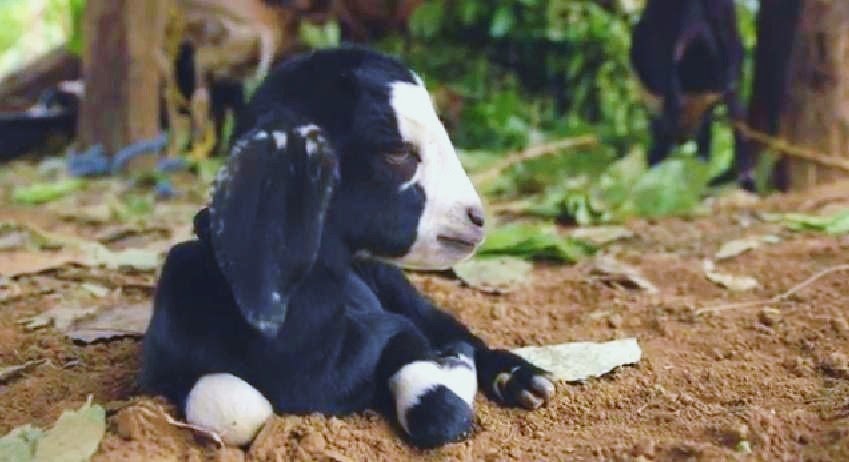 For the Girl Who Has Never Seen the Ocean

Cumulus clouds expand and contract in the sky's loom.
She stares them down. She stares them down and the mountains
They swoon before her innocence,
before her dark eyes that pierce and gleam like sun off a fetid pool.
She sits upon her throne, a school
now merely  twisted lumps of metal and concrete,
a wound from the earth, a place to plant her feet
and watch valley walls rise to a sapphire roof.
What is this thing in the grown, that must own or despise the innocence of youth?
Destroy passion and compromise hope. These pour off kids like grace, like joy off of starlings
weaving between golden shafts of light. This dark, grown-up thing covers her sight,
covers here future in apathy and disillusion.

This fierce Bedouin, barefoot upon her school in ruin. In her valley
which has swallowed a thousand graves in its rich soil
who's tents have seen a thousand births and caves that hold a thousand stories.
Her father tries to tell her some, but she has now only worries of what her life
And her children’s lives will become.
But late at night, as she lies curled on her mat, between mother and sisters
The wind whispers through the tent flaps, the smell of ocean on its tail
She dreams of climbing these valley walls, like her father and uncle used to.
She dreams white sails of distant ships skimming upon the sea she has never seen
She hears the foam capped waves whip the rocky shoreline
as gulls wheel and spin and dive dissolute into the murky brine.

This chaos makes sense.
This uncontrollable thing, so deep and dense,
Smothers many lives under its surface, but nurtures many more.
It cannot be tamed, not even by the shore that holds it.
The ideologies of the grown own, occupy and oppress. They devour the girl's youth.
They bind her to these valley walls. But truth, like the ocean cannot be bound,
only found in chaos and ever-shifting waters.
And justice, like water, always flows downwards.
Finding the lowest places to lay – and oh, this valley lays low.
Sitting in the unjust low, the still-point of the broken world, she waits
with the patience of the oppressed. The chaos of wild things
churning in her chest, burning in her fierce eyes
This girl, who has never seen the ocean. 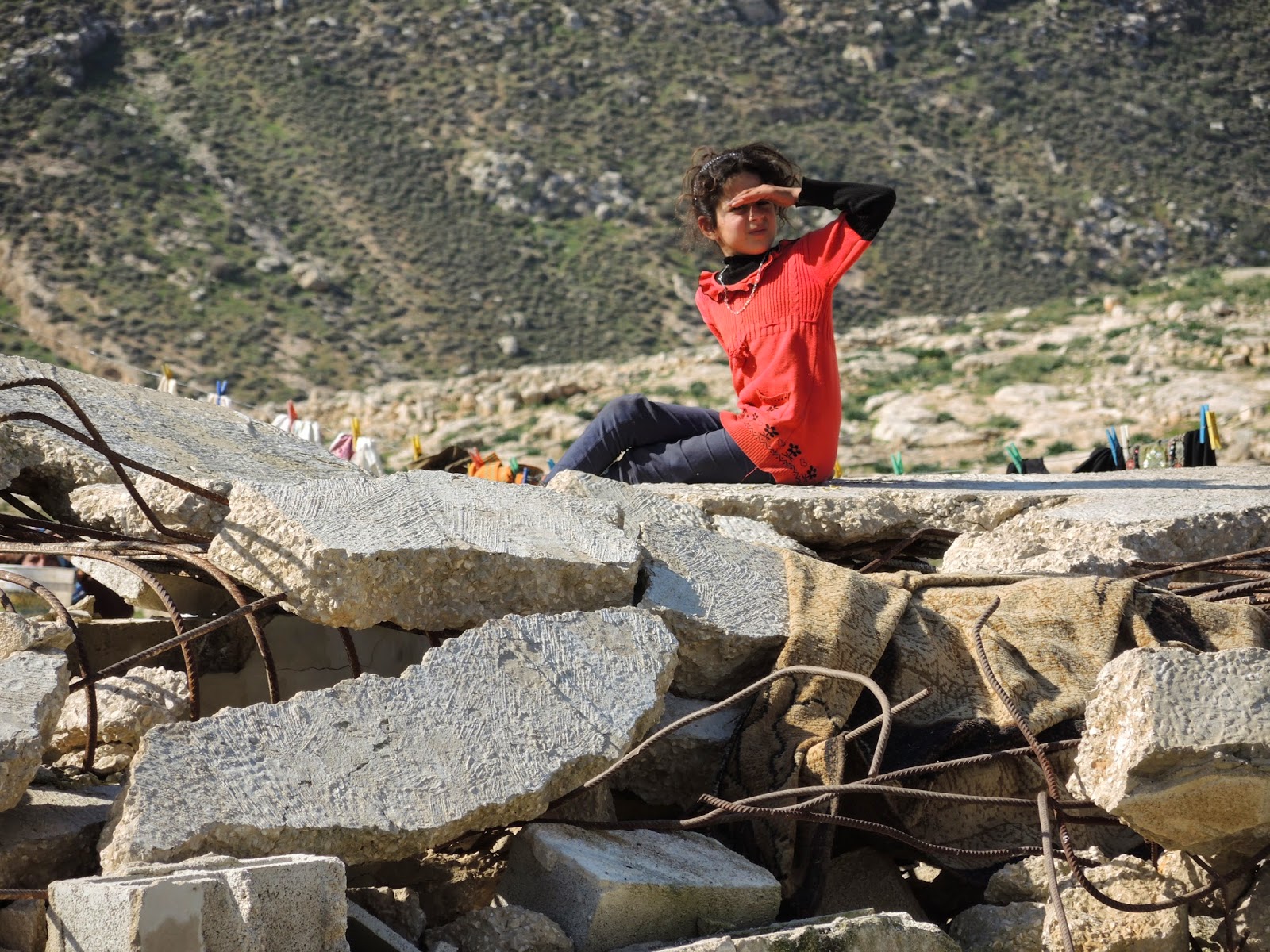 For Abdul Odim, Mayor of Qusra

October's harvest finds him between planted rows of olives
keeping one eye on his work and one on the hills
that's where the trouble comes from
But today I find him in a cold, grey office
typing on a keyboard too small for his cracked and swollen farmer's hands
a reluctant mayor of a crumbling West Bank village
His dank office is filled with photographs - gruesome, faded pictures of twisted, bruised faces
broken limbs and spirits.
These photographs, dog-eared from holding, tell stories of his townsfolk, his loved ones
crushed by a machine that must oppress and destroy
and feed on the souls of the vulnerable to grow
it eats rocks and bullets and unbridled hatred
turns them into fuel
into tools to justify its violent course
Pictures sit around his desk like a shrine with sad and swollen watching eyes
reminding him of his failure. Reminding him of his duty
reminding him. Reminding
Always reminding.

Settlers charge through the mayor's village one day, screaming
our roots run deeper than these olive trees!
they saw the ancient, twisted growths off at the base
so nothing would be taller than they, when their feet rooted into the grey, stony earth
They shoot their weapons and hurl their insults, as zealots do
they roll burning tires into the mosque, like fiery prayers with suffocating incense
but they are not prayers to the mayor's God
the mayor's God lives in the tilled soil, the cut olive trees, the cracks in his hands
the mayor's God sings with rain and fills the hillsides with poppies

The reluctant mayor wipes cement dust from his old boots
he'd been laying a floor in the widow's barn, hoping it would set before the rains came
I'm a builder, he thinks. A farmer. A husband and father
my work is in the soil. Not a war
but planting fields is political around here
With his trimmed moustache and strong, pointed nose, he reminds me of a hawk
tired, grey-rimmed eyes gazing down upon a shattered landscape. A shrinking map
above, day-blind stars scatter endlessly beyond the reach of his wings
A caged hawk. Caged by abstruse power, chained to the stones of his field
chained to the photographs that decorate his office wall
burnt forever under his eyelids, a harsh reminder - that all is not well in this place
a reminder to never forget those sad, swollen eyes. Broken limbs and spirits
Reminding him. Reminding
always reminding.

It's Australia Day and I'm in Palestine. I can't help but draw parallels between the two countries – the two stories of invasion, displacement and imperialism.

On January 26th, 1788 the British flag was raised in Sydney Cove for the first time. A day some celebrate as the colonisation of Terra Nullius. For others it commemorates a day of invasion, grief and survival. A day a people lost their land and their identity. May 15th, 1948 is celebrated as the day the state of Israel was officially established. Known by Israelis as Yom Ha'atzmaut (Independence Day). To the Palestinian people this day is called The Nakba (the day of disaster) where over 700,000 people were forcefully removed from their land.

Both Yom Ha'atzmaut and Australia Day are days that can only truly be celebrated by the powerful. The conquerors. They are celebrations of one races victory, at the expense of another. Of course these are not uncommon stories; the world's map has been shaped by violent conquest, occupation and displacement. But on this day celebrated by the country I call home, I sit in a tiny West Bank village surrounded by razor wire and landmines, fighter jets occasionally flying overhead and I wonder…Why? Why does it have to be this way and why we must celebrate it? The tactics of imperialism that have displaced Australia's First Nation people are the same tactics being used here in Palestine. In fact they are the same tactics used against the Jews in WW2. A people group have been scapegoated. Laws are established to segregate, oppress and demoralise. They are dehumanised through government and media propaganda. A people are dehumanized and become the enemy. Terrible acts of violence and hate are done to them, while many stand idle, apathetic or unaware of the abuse.

Hate instills hate. A friend of mine here, a journalist, asked a Palestinian teenager at a check-point what their favourite memory was. The boy gave a gap-toothed smiled and responded, "the first time I threw a rock at a soldier". Violence is conditioned into the children here, on both sides of the wall. Israeli teenagers become trigger-happy soldiers, heads full of Zionistic nationalism. And the rock throwing boy becomes the crazed bomber on the bus, the axe-wielder in the synagogue. Desperate to feel powerful, if even for a moment. The imperialistic system that has shaped Australia, and is shaping Israel/Palestine demands such responses. It pulls us into its web and it seems you must either conform, lash out with what force you can muster, or be crushed.

But I believe there is another way. Or at least I have faith there is. It is the way of hope – the way of creativity, joy and nonviolence. My Palestinian friend Ghassan told me, "no matter what, we must have hope. Without hope, there is no life". Hope manifests itself here in art, poetry, music, clown schools and theatre groups that resist the occupation by creating beauty and life, like any thriving society should. They tell another story – one that doesn't involve guns or violence. This Way (I believe it deserves a capital) is beyond the system of Us versus Them, Tribe versus Tribe, that an imperialist empire relies on to function.

So today I choose not to celebrate, because to celebrate what the 26th stands for, is to accept and legitimize a broken system. But I do choose to hope. I hope for a day that I can truly celebrate this Day – with boxing kangaroos temporary tattooed on my face, Australian flag adorning my shoulders as a cape, twirling wildly as I dance to the JJJ hottest 100. Celebrating alongside those who have been displaced by Australian imperialism, but are now empowered and included in a free society.

The system is enticing. Look at how our indigenous brothers and sisters, the homeless, asylum seekers and any who don't fit the societal mold, are still being treated today. We are fooling ourselves if we say we are not the same nation we were 200 years ago. The roots run too deep. But it is the nonviolent, creative resistance I see here and back home that make me think it doesn't always have to be this way. There is another another Way to walk - another story to create.